The high quality and large formats of SCALA images coupled with the expertise and availability of our photo lab technicians and photographers ensure that details remain sharp even at the largest zooms and sizes. The effect can be astounding. The perfect files for shows and exhibitions. Here are just some examples of the exhibitions created thanks to SCALA archives.

“Inside Magritte”, is the innovative multimedia exhibit dedicated to René Magritte master of the surrealist movement. The show opened at the Cattedrale della Fabbrica del Vapore in Milan in 2019 and was replicated in several other foreign locations. Covid 19 interfered with some of the openings that had been planned but was none the less successfully on view in Seoul in 2020 and Brussels in 2021.

To celebrate the 500th anniversary since Raphael’s death, the exhibition Magister Raffaello is presented to the international public as an unprecedented story and experience for the viewer. It has been conceived as a journey through six contemporary settings where key artworks accompany the visitor in the discovery of Raphael’s art. After its initial success the show was requested in many other nations and continues to travel satisfying the curiosity of many different people.

Magnificent: The History of Beauty

MAGNIFICENT: THE HISTORY OF BEAUTY that revolutionized the world. The story of the birth of beauty is narrated by famous opera singer Bocelli and illustrated by Felice Limosani who used and projected the extraordinary Scala images onto the massive walls of Florence’s Sala d’Armi in Palazzo Vecchio.

The Great Masters of the Renaissance – Vienna

More than 60 of the most famous artworks by the “great masters of the renaissance” such as Leonardo da Vinci, Michelangelo, Botticelli and Raphael, were reproduced at 1 to 1 scale, true to the originals in their impressive dimensions. The visitor is guided through the Renaissance period through its most famous masterpieces organized in one single place.

Klimt Experience is an immersive experience detailing the life and works of Klimt, founding father of the Austrian secession movement. Thanks to the highest quality of the images supplied by Scala you will be able to immerse yourself in the gold and precious details of Klimt’s works. 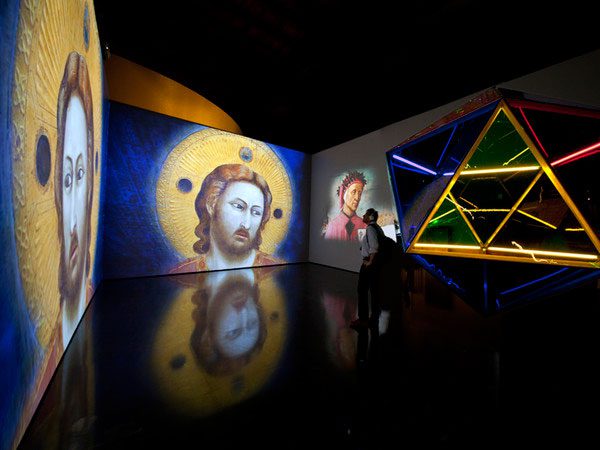 The immersive cultural experience of Magister Giotto was on view at the stunning location of the Scuola Grande della Misericordia of Venice. It was a unique and surprising immersive experience narrated on a specifically created musical score by italian greats such as Luca Zingaretti and Paolo Fresu.
In 2017, for the 750th birth anniversary, Magister Giotto was the first large scale exhibit dedicated to the Tuscan master.

With Monet Experience, SCALA images contributed to the sensory immersion into masterpieces by the impressionist painter. The works of Monet and other great impressionists appear at 360 ° on the huge screens and on the architecture of the desecrated church of Santo Stefano al Ponte in Florence.